The Curious Case of Ophelia's Apothecary

I have been very hesitant to write this post, but I feel like it's at the point where I need to at least briefly discuss what Ophelia's Apothecary is doing at the moment.  I have, in the past, recommended them to friends.  However, while I am not going to say this is a BAD company, I won't recommend them any longer.  I invite you to read this post and make your own decision based on the evidence at hand.  I think it's important that indie customers be well-informed of any potential issue they may have with a particular company.

First of all, for those unaware, Ophelia's Apothecary is an indie company based in Missouri that makes and sells custom perfumes, lotions, skincare, mineral eyeshadow, lip balms, etc.  To be quite honest, her product are quite lovely and small heavenly.  She posts her turnaround time on her website, as such:


"SHIPPING:: I strive to ship everything within an 8 to 12 business day window. However, some things do take longer to cure and depending on how busy it is, I may run three to four business days longer. I do make everything fresh in small batches, so just because it's listed, doesn't mean I have it ready to ship. If it's ready to ship immediately, I will state that within the listing."

I am not an unreasonable person.  I understand that things go wrong, that the occasional order can slip through the cracks, or that an indie company can become extraordinarily busy and TAT can be affected.  This is a whole new animal though...

I feel like I also need to disclose that this company's owner DOES have a medical condition (I'm really not sure what).  However, she does discuss it a bit on the Facebook page for her company, so I felt like you should be aware of this as well before I cut to the chase.

First of all, she has removed the customers' post area from her Facebook and comments about orders that are potentially negative in nature have been deleted quickly.  I really hate when companies do this.  Personally, I feel like it's best to address an issue than to delete comments and pretend the issue doesn't exist.

Ophelia's has a monthly subscription box.  After seeing some incredible reviews of her monthly, I subbed.  My first month, I didn't get a box.  I ended up getting my box near the end of the month after it was due.  Some people wound up getting their box, packaged with the following month's box...during month three.  They aren't BAD boxes, but they don't blow me away.  I was probably a little biased because I was fairly angry that I didn't get my box on the month it were designated for and I felt that I didn't really get the service I paid for (a box of goodies to try each month).  One month, she gave out eye shadow samples...when she had announced that shadows were being discontinued.  The purpose of her box was to try several of her products and decide if they'd be worth buying in full sizes.  Clearly, even if I LOVED the shadows, no one could order them.  She was trying to destash something she wasn't going to continue selling by dumping them in her monthly.  It was fairly insulting.

I DO NOT subscribe to her box any longer.  However, I continue to read some very troubling things about this company and I felt it necessary to share here.  I urge you to draw your own conclusions based on facts.  I am not, in any way, attacking this company's owner's personal character because she certainly SEEMS like a nice person.  I think she's just in over her head.  She can't even close down until she catches up because, as she states herself, SHE RELIES ON CURRENT ORDERS TO PAY TO SHIP OUT HER OVERDUE ORDERS.  That's right, she has collected money from customers for products that she cannot afford to send to the purchaser.  Instead, that package's money is used to pay for older orders to ship and the purchaser's current order is held hostage until more people buy items.  You do not have to take my word for it.  Here are some snippits from conversations her customers are having in the internet:

12/23/13:  "She is upset that I complained so she cancelled my subscription.... really???? That just goes to show the level of professionalism that is lacking..."

1/24/14:  "...I just wanted to share that I still have no received my December bag or my January bag as well as some lip balms I had bought from her MORE THAN A MONTH AGO. I tried to be patient in past months even though I always got my bag during the first week of the month after I was supposed to get it, but this is just outrageous. I sent her a message a couple weeks ago on Facebook and she replied saying she is super behind on orders because she got overwhelmed and plans to put the sub on hold next December as a holiday break so she's not swamped."

1/24/14:  "That's what she did with mine. I ordered one of her Flash sales and she when she finally sent everything (she wanted to save on shipping) together it was Nov, Dec and my Flash sale items on the 23rd of Dec. The Dec bag was two items.... it was just all thrown together... sad as I did like some of her items a lot. Anytime I ever ordered anything extra she would always hold it and send it with my sub..... irritating."

2/13/14:  "<sigh>... at least you got a bag.  I got my december bag in the middle of January and have gotten NOTHING since. I'm in a long term subscription with her, and I feel totally stuck.  I know she does it all herself and we should support indie business... but I basically threw my money away since I never get updates about my stuff or if a bag is ever even coming.  Oh well."

2/13/14:  "I've gotten nothing from her since my November bag!!! I messaged her in January and she said my December bag along with a flash sale I had purchased would be packaged together with my January bag. I never saw any of that and it's mid-February! My subscription ends with February. I really do love her products and use her lip balm every day, but I may have to stick with flash sales every once in a while and give up on the sub. I know she's having financial and health problems via her Facebook and she says she relies on invoices to pay for shipping, but that makes no sense since my payment for a flash sale or three months advance subscription shouldn't be paying for other people's old orders to be shipped. So I don't know. I'm sure she's a nice woman doing everything herself but I think she's in over her head with the subscription."

3/1/14:  "I am waiting on my order from January. I have not received my January or Febuary sub bag and I have close to $100 in order out there. I asked last week for an update and she told me she would have it out by Thursday....... Here we are a week and a day later. I don't understand."

Here's the reason, according to the Ophelia's Facebook page:

"Okay lovelies....I just want to take a moment to thank you lovelies for your kindness and support during the last few weeks of medical junk. I've had messages of support and messages of not.so.much.support. This is absolutely the only thing we have for income and when we get behind in shipping, it could be from 1)us having to take time away from the shop with medical testing and whatnot, or 2)not having the funds to ship. So, while I am behind, I do still have to post flash sales and such to keep income coming in so that I can pay out to ship orders. This is not the way I would like to handle it, but when the medical needs outweighs what's coming in, it's simply a fact of life. I've had messages saying 'hire someone to do it for you'...that is not a luxury we have available to us. I can tell you that I will try my best to get through the orders just as soon as possible and get the items to you. Sometimes, when people request items and I invoice, they may not realize that I'm counting on those funds to ship products.....and they wait a week or so to pay or forget and don't pay at all. This also prohibits shipping because I will have sometimes around $400 out in invoices that are just hanging out and I don't know when or if they will get paid. I just wanted to let you all be aware of the situation and please know that I am not intentionally stalling orders. I am trying the best I can to juggle a ton of stuff and appreciate any and all understanding. ~xo" 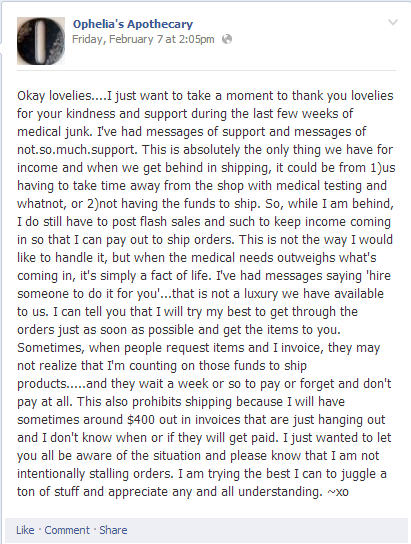 The big issue here is that she shouldn't be relying on new orders in order to have money to ship old orders.  The concept isn't hard...you charge enough to be able to cover your costs, including shipping, and make a profit.  She's clearly not doing that, so having flash sales is counterproductive if she's not even making enough on full priced orders to allow her to ship stuff that is going on two months old.  She clearly was overwhelmed with Black Friday and Christmas orders, which happens to even the best, well-staffed, indie companies.  That said, if you're not able to afford to SHIP those orders, there's a problem because you're doing 10x (if not more) business during the Christmas season as you're doing at any other point during the year.  So how many orders does she need to get in order to pay for shipping on the holiday orders?  Then what happens to the new orders? Do they just sit in the shipping queue until summer because there aren't enough customers to pay for the shipping on them? And also, why are you BLAMING OTHER PEOPLE who have NOTHING TO DO WITH THE PAYING CUSTOMERS for the massive shipping delays?

She needs to shut down and get caught up.  However, she can't do that because she can't afford to get caught up without remaining open.  It's a no-win situation with her, but the bigger loser here is her customers.